Bill Davis Trucking, Inc. is the result of a lifetime passion for trucks. Bill Davis grew up fascinated with trucks. His grandfather's small private fleet, which was responsible for the transportation of cattle, was his first inspiration. When Bill was five years old his father left the security of his own father's business and moved his young family to Little Rock to begin a long career in retail truck and trailer sales. With the move, Bill was introduced to a new element of the industry, long-haul trucking, and as the saying goes "the hook was set."

During Bill's youth he was privileged to meet most of the truly legendary truckers in the very intense trucking state of Arkansas. He met individuals that left a legacy in our state, such as J.B. Hunt, Willis Shaw, Harold Ives, C.C. Jones, and Julian Martin. Shorty Jones and Julian Martin were the most influential in Bill's life.

Julian Martin, a very close friend of Bill's father, offered Bill not only a job, but a place for his two trucks and most importantly a priceless education in how to run trucks efficiently and profitably. After two years in the office at JMI, Bill and his new business partner, Gail, launched BDTI with three trucks and a dream.

After 40 plus years, they have built an enviable track record of success with hard work, determination, and attention to detail. Most people would agree the dream has come full circle,. 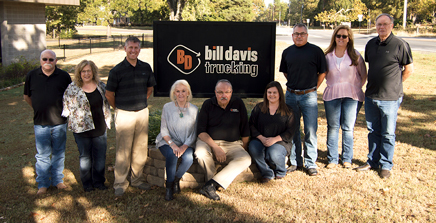